Vaccines halted the spread of polio in the 1950s. And over the next three decades, inoculations triumphed over the once-dreaded disease in the United States. Before that, however, the infection, poorly understood and striking seemingly at random, consistently circulated at low levels each year in the fall, winter, and spring. Because, as researchers came to understand, the illness spread through the air and water, it flourished in warm weather when people congregated at swimming pools, backyard barbecues, and patriotic parades. Fear of poliomyelitis brought a chill to the summer air and civic life in much of the early twentieth century.

In that era Americans sometimes called polio “infantile paralysis” because the virus, which attacked the spinal cord and left muscles severely wasted and permanently damaged, targeted two in three victims younger than nine years old. Polio infected more than four hundred thousand children when the pandemic spiked between 1946 and 1953, having crossed the Atlantic with millions of returning soldiers and refugees in the wake of World War II. Isolation wards filled. Homes became quarantine zones.

Many thousands of adults contracted polio in the first half of the twentieth century, too. (After recovering the most famous of them, a future president of the United States, Franklin Delano Roosevelt, could walk only with the aid of crutches and leg braces.) Another sufferer, a San Diego schoolteacher named Eleanor Abbot, was also a board game inventor. History would have forgotten her had she not devised the popular game, Candy Land, during her recuperation. In fact, the epidemic inspired the game launched in 1949.  It’s a game that we still play. Samira Kawash, a cultural historian, noted in a fascinating article, “Polio Comes Home: Pleasure and Paralysis in Candy Land,” in the American Journal of Play, that 60% of American mothers know of the game.

Abbot’s story is especially interesting now at the onset of the current coronavirus pandemic, because the game recruited play as a tonic and distraction that proved an essential component in the management of the disease. Doctors could do little for most young polio patients other than to prescribe prolonged periods of seclusion and bedrest. Abbot knew that children needed active play and lively playmates and knew also that they felt doubly victimized when confined to a lonely bed. Boredom had become the enemy of therapy.

Fashioned as a race, her game promised sweet surcease in a sugary terrain. The youngest players needed not be readers as they could simply match the color of the card they drew to the next colored space. Game pieces and vicarious players passed through a Peppermint Forest flanked by Gumdrop Mountains. They encountered diverting obstacles, too. But it’s not so bad being mired in the Molasses Swamp or wandering alone when it’s the Lollipop woods one is lost in. These sweet time-killing reveries contrasted with the forlorn reality of imposed seclusion.

Abbot made sure of two things; that the game’s delights would not tax young patients’ diminished reserves, and that play would continue to be inviting as long as players were ready. 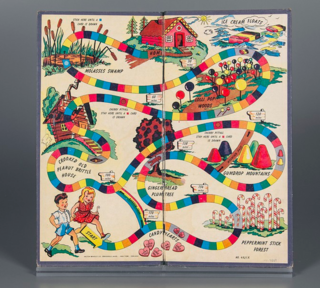 Crucially, unlike other games that come to their end when players’ resources run out, as for example Monopoly does, Candy Land keeps moving forward, or back, or sideways in a loop. Nor did Abbot’s strategy impose time limits. She allowed for flexible rules that let the open-ended game trail off voluntarily, when the player overshot the Candy Castle, let’s say. Or the game could finish when the last purple card landed on a purple square.

For patients, recovery proved long and hard and this disease often left them with lasting disability. The image of the original game board shown here pictures a small but fascinating detail: look closely at the leg of the exuberant boy at the starting line. You will see a brace, a legacy of polio.

At this writing a new pandemic, the novel coronavirus, and its illness, COVID-19, closes in. Public life grinds to a halt. Schools and universities suspend classes. Museums close their doors and theaters go dark. Sports leagues interrupt their seasons. Cities shutter bars and restaurants. Cancelled St. Patrick’s Day parades leave city streets empty of festivity. Business furlough workers or ask their employees to telecommute. Governments curtail operations and even postpone primary elections. As virologists work around the clock to fashion a vaccine, countries seal their borders, looking to containment as the only viable present option to curb transmission.

Around the world the novel coronavirus leaves billions of us housebound and suffering a mild symptom, cabin fever. But unlike kids in polio wards in the 1950s, who were not permitted visitors and may not even have had a radio for company, we are not left without resources. This is the era of “peak television” after all; I’m catching up on Watchmen, Homeland, and cracking up watching The Amazing Mrs. Maisel. YouTube now lists an impressive collection of symphonies and music videos; do click on Alina Bercu’s spectacular performance of Beethoven’s Fifth Piano Concerto. And I can also commend to you Beyoncé’s rousing Single Ladies. Libraries now offer borrowers a bursting catalog of books and recordings online. The Online Books Page features three million titles, available without charge. This morning I opened Daniel Defoe’s timely Journal of the Plague Year. And because the gym is now closed, I’m listing to Martin Short’s I Must Say, Billy Crystal’s Still Foolin ‘Em, and Rachel Dratch’s Girl Walks into a Bar while pedaling the elliptical machine.

Most of us are not socially isolated, either, despite obligatory social distancing. We share long phone calls and emails full of defiant jokes with our electronic circles. We circulate editorial cartoons. We Skype on our laptops or FaceTime on our phones. My wife keeps three remote crossword puzzles going: “words with friends.” And she joins her watercolor cabal via Zoom. I’m learning to play “Somewhere Over the Rainbow” on the ukulele. This has also guaranteed a margin of social distancing…

So, for the duration, my advice, play. Dance in your living room. Sing Pop Goes the Weasel while you’re washi

ng your hands. Walk outside. Take the goofy dog along if you have one. Go for a bike ride. Go fly a kite. Wave to your friends. For now, keep your distance and skip the hugs and handshakes. And for Pete’s sake, don’t forget to call your mother.

What COVID-19 Has Done to America’s Drug Epidemic

The State of Mental Health

European football news: No fans at Italian games until 2021? 1bn euro bill to...

coronavirus vaccine: How soon will we have one? || when will coronavirus end |...

The WWF raises the alarm: why the loss of forest in the tropics has...

Should We Brace for a New Wave of Suicide?

WebDesk - May 27, 2020 0
The COVID-19 pandemic continues to place great strain on the country. However, much of the recent health- and media-related coverage has shifted to an...