Over the last two months, numerous headlines have celebrated the success of women leaders in tackling Covid-19. They’re not just riding high in popularity ratings. Hard data on how the virus has been contained indicate that countries led by women, like Germany, New Zealand and Taiwan, are doing better than many countries led by men.

However, such comparisons are problematic. First, the law of small numbers. Out of 193 member states of the United Nations, fewer than 10% are led by women. Not only is generalization risky from such a small sample but women who have made it to the top against such odds will likely have overcome more obstacles and be unusually talented and resilient. To quote Charlotte Whitton (as my mother likes to do), “Whatever women do they must do twice as well as men to be thought half as good. Luckily, this is not difficult.”

Second, many male leaders are doing well too. To claim that women leaders are handling the pandemic better than men are, it is not enough to point to how well some women leaders are doing. One has to compare the proportion of good to bad leadership among men and women. Given the egregious failings of some particularly high profile male leaders, it is tempting to conclude that the differences are gender-related. But just as Merkel, Ardern and Tsai might be outliers, so too might be Trump, Johnson and Bolsonaro.

Third, better how? In recent articles, women leaders have been praised for their rationality, decisiveness and toughness on one hand and their compassion, humility and ability to collaborate on the other. In contrast, men are criticized for their arrogance, macho disregard of risk and callous insensitivity. In short, female leaders are portrayed as no-nonsense supermoms and their male counterparts as ineffective blowhards. 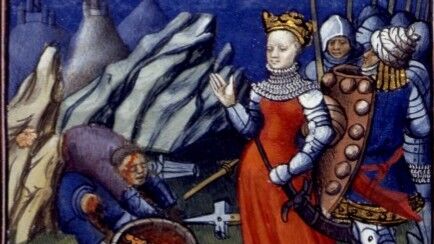 Manuscript of Medieval Warrior Queen and slain Warrior King. Used as an Illustration of warrior queens of Basque Senorio.

True, some male leaders make such gendered caricatures all too easy. Nevertheless, the idea that female leaders combine supposedly masculine traits like rationality and toughness with supposedly feminine ones like compassion and humility should raise our suspicions that we’re cherry-picking the data to fit a pre-existing theory.

Like many theories of gender difference, the theory that men and women lead differently lacks empirical support. Despite the view popularized by John Gray’s 1992 bestseller, Men are from Mars, Women are from Venus, men and women are much more similar than they are different. As psychologist, Janet Shibley Hyde, put it recently, summarizing decades of meta-analyses, involving hundreds of studies and millions of participants: “Women are from Earth and men are from Earth.”

If so, why are we so keen to view leadership through the lens of gender? Why, instead of celebrating good leadership and critiquing bad leadership, are we talking about gender at all?

Women leaders are still a rarity, so perhaps some of the interest can be put down to novelty. But even here, there’s an element of paternalistic surprise. The headlines carry a subtext: Isn’t she doing well … for a woman. They also tap into a larger cultural trope: The Battle of the Sexes. Although competitiveness is a supposedly male trait, and most of these articles are authored by women, many have a triumphalist air about them, in the spirit of “anything you can do, we can do better”

But perhaps, more than this, our interest in women leaders’ success is an expression of frustration and hope. It’s not just that they are doing better than the worst and noisiest of their male counterparts. It’s that they look and sound so different. Their whole demeanor suggests a calmer, more responsible and more inclusive way to lead. For all the drawbacks and dangers of tying these characteristics to gender, doing so emphasizes the contrast and points to a different, and better, kind of leadership to which we can all aspire.

So, bottom line: Are women better leaders than men? Unfortunately, there are still too few women leaders for us to know. But to paraphrase a familiar feminist hope, I look forward to the day when there are enough mediocre women in positions of power for us to compare their performance more rigorously with that of their many male counterparts.

Pregnancy in the Pandemic: A Mental Health Perspective

The State of Mental Health

Grenfell cladding not the only type to burn easily, tests show

While the lace bra mask idea started off as a half-joke, they sold out...

5,000 respirator masks were just found in the crypts of the Washington National Cathedral

Coronavirus: 36% Of Americans Say Pandemic Has Made A ‘Serious Impact’ On Their Mental...

What is coronavirus, its symptoms and how to prevent it?

A Health Crisis and Herd Immunity

WebDesk - March 20, 2020 0
Source: Zigres/Shutterstock Until earlier this week, when Boris Johnson’s administration in the UK made an abrupt U-turn on its approach to managing COVID-19, Britain was...